By Sharon Patton-Griffin on September 3, 2018 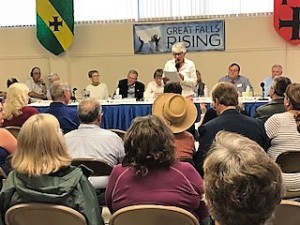 From The Electric
Posted on September 2, 2018 by Jenn Rowell

Local government officials laid out areas of concern for state lawmakers during a forum on Aug. 28th.

County Commissioner Jane Weber said local officials typically organize a meeting with area legislators in the fall after the Montana League of Cities and Towns and the Montana Association of Counties meet to discuss their legislative agendas. She said they’ll likely do that again this year but wanted to put some big issues on the radar for legislators going into the 2019 session.

They opened with overarching support for military operations in Montana and said that collectively they “support efforts to protect existing military assets in Montana to collaboratively address national cuts to any Montana military asset and develop opportunities for defense industry growth.”

Commissioners didn’t offer many specifics on what that kind of support would look like, but it’s noteworthy particularly in light of the upcoming City Commission vote on the proposed Wheat Ridge project south of Malmstrom Air Force Base.

City Commissioner Bill Bronson said, “we would be foolish…to fail to recognize the tremendous impact that these installations have” on the local economy and their contribution to national defense.

County Commissioner Joe Briggs said one thing the state could do was create reciprocity programs for professional licensing and certifications. Those licensing requirements are different by industry boards and some already have various reciprocity, endorsement or compact agreements that allow someone licensed in another state to work here or vice versa. Montana has no reciprocity for teachers licenses.

Briggs said such an effort would signal to the U.S. Defense Department that Montana supports current and future military missions, which could impact basing decisions, according to a February letter from the service secretaries to the National Governors Association.

In their letter, the secretaries of the Air Force, Army and Navy wrote that “while focus on the mission is always our priority, the factors military families cite most frequently as drawbacks to military service include military dependent’s difficulty assimilating into local school systems following a duty station transfer, the quality of schools available for their children, and the ability of spouses to obtain jobs and sustain careers. With that in mind, we will encourage leadership to consider the quality of schools near bases and whether reciprocity of professional licenses is available for military families when evaluating future basing or mission alternatives.”

The letter doesn’t identify specific states or occupations that are arduous for transitioning students or careers.

Given that the Pentagon has been asking Congress for the last several years to allow a round of the Base Realignment and Closure process, or BRAC, to save money and streamline operations, the letter could be seen as a signal that education and employment for military families will be a factor in any near future BRAC decisions. Congress has prohibited BRAC in the last several defense authorization bills and the Pentagon didn’t include it in this year’s budget request.

The National Governor’s Association is currently chaired by Gov. Steve Bullock and in March, NGA’s executive director responded to the DoD letter to say that the group is currently working on a project to assess state licensing policies and practices.

The 3-year project is funded by a grant from the U.S. Department of Labor’s Employment and Training Administration and will attempt to identify licensing criteria for 34 occupations across 55 states and territories “to ensure that existing and new licensing requirements are not overly broad, burdensome or restrictive and do not created unnecessary barriers to labor market entry.”

The goal, according to NGA’s letter, is to improve portability and reciprocity for selected provisions across state lines, but the letter does not identity those selected occupations nor has their report been released yet. The project also focuses on reducing barriers for several target populations, which includes veterans and military spouses, according to the letter.

DoD participates on the NGA panel of experts that’s assisting the project, NGA said, and “we encourage the Department to continue to proactively put forward data and recommendations and we look forward to continued collaboration with you on this project.”

Montana joined the Interstate Compact on Educational Opportunity for Military Children in 2013. The compact is designed to address challenges faced by children of military families when they switch schools due to their parent’s military service.

The local commissioners also support, and there are resolutions from the MLCT and MACO, on changing the current cap on inflation increase for mill levies. Currently, state law allows local governments to levy to generate the amount of property taxes assessed in the previous year, plus one-half the average rate of inflation for the prior three years.

According to county and city commissioners, that has yielded an average inflation adjustment of about 1.09 percent since 2001. City and county commissioners said that rate hasn’t kept pace with cost of living adjustments or benefits for employees, or the cost of goods and services.

MACO is proposing to remove the one-half language and instead allow a mill increase at a state-calculated rate of inflation over the prior three years.

Sen. Ed Buttrey, who is now running for the Montana House, said to allow local governments the ability to raise more tax revenue, it would need to tied to proof of an increase in wages or jobs or growth in some way.

Briggs said flat revenue, coupled with legislative mandates that keeps passing costs to local governments “that are really the state’s bill” hampers their ability to provide services as the level residents have come to expect.

The county also supports changes to the state rules for the INTERCAP loan program that require loans in excess of $250,000 to have underwriter opinions, among other technical requirements. Those rules limit a local government’s ability to finance major rural improvement districts, county commissioners said during the forum.

On jail funding, the county commissioners discussed concerns of overcrowding and state rules that they say pass costs from the state to local governments.

Part of that concern is the legislative cap on the daily reimbursement rate of Department of Corrections prisoners held in county jails. The state rate is less than the calculated cost of incarceration, according to both county commissioners and jail officials.

There’s also frustration on the part of Cascade County for state prisoners that are released and then either violate the conditions of their release or commit a new crime and when the county picks them up on those charges, it then assumes the cost for their incarceration. The state no longer revokes parole, county commissioners said, effectively transferring the cost to local jurisdictions.

That arrangement had been specifically addressed in contract language, but now the contract is silent on that situation, County Attorney Josh Racki told The Electric earlier this summer.

Using jails to house people with mental health issues is also a concern to the county since, commissioners said during the forum, that jail isn’t the place for that. It’s difficult to get people to the Montana State Hospital at Warm Springs, they said. In an effort to address mental health services in the county, commissioners have designated $1 per county resident for the Center for Mental Health.

While discussing the public safety needs in the county and strain on the jail, county commissioners said they cannot afford the courthouse remodel that would be necessary to add a fifth district court judge in Cascade County. The state funds the judges and most of the associated judicial staff, but counties are required to provide the courthouse space.

The county also provides space for Justice Court, the Clerk of Court and Youth Probation at the courthouse. County commissioners said housing youth probation is not a county requirement but has been provided within a county building for many years.

According to county commissioners, the courthouse remodel to create the fourth courtroom was more than $1 million. A fifth courtroom could likely be accommodated by moving youth probation to a non-county building and such a remodel “lies outside of the county’s fiscal ability without state financial assistance,” according to commissioners.

Bob Moretti, a Democratic candidate for the Montana Senate, asked if the federal courthouse at 125 Central Ave. W. could offer space.

Weber said the county and city have looked into using the courtroom space at the U.S. Post Office on 1st Avenue North downtown, but “it’s a nightmare for logistics” and the “security issue becomes a tremendous expense.”

Medium-cost housing shortages and centrally assessed properties were also included as areas of concern for local governments, as were mail-only elections, which The Electric will cover in a separate story this week.

Please consider a donation to Great Falls Rising by clicking the button below. As a 501(c)(4) organization, the donations are not tax deductible, but they are definitely appreciated. They help Great Falls Rising cover expenses such as cost for a meeting place, web presence, expenses for speakers coming from out of town, etc. Thank you.