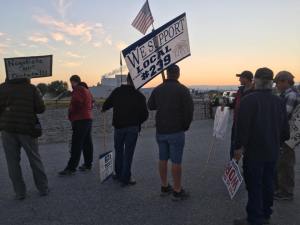 Boilermakers Local D-239 and Imerys America met yesterday to try and hammer out a contract for the talc plant in Three Forks, MT, and the Montana AFL-CIO has reported today that Imerys is still refusing to negotiate in good faith and making any concessions.  The issues don’t revolve around wages but center rather on seniority issues at the plant and health benefits for retirees.  Locked out workers lost their health benefits at the end of August, so it has been a stressful time for the group and their families.

The company brought in approximately 80 individuals to replace the 38 workers locked out.  Between the professional scab workers from a company in Minnesota (with housing in local hotels and per diem), to additional security hired for the plant, and to workers at the non-union plant south of Three Forks that were forced to transfer to the plant, it is obvious the expenses the company has paid to try and break the union is huge.  The production is evidently down and mistakes are being made during production, as evidenced by “dusting” events observed through the night.  Replacement workers even crashed into an outer wall in the plant (see picture below).  It is hoped Imerys can very soon offer a fair contact to their experienced, loyal union workers.

Mine truck leaving the plant.

Workers before sunrise the day after Labor Day, waiting for the vans that bring in the replacement workers.

Kathleen Williams speaks to the crowd at the Labor Day Rally. 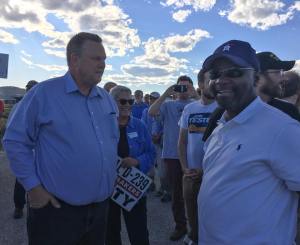 Locked out union members have been standing vigil 24/7 since being locked out August 2nd. 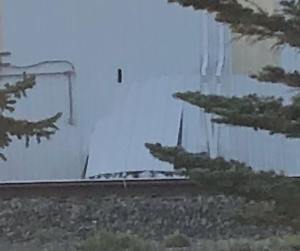 Damage to the talc plant by replacement workers.

Like Loading...
‹ Rally and March to Reclaim Public Say Over Public Lands
Public Objection Period Opens for the Blue Joint and Sapphire WSAs ›